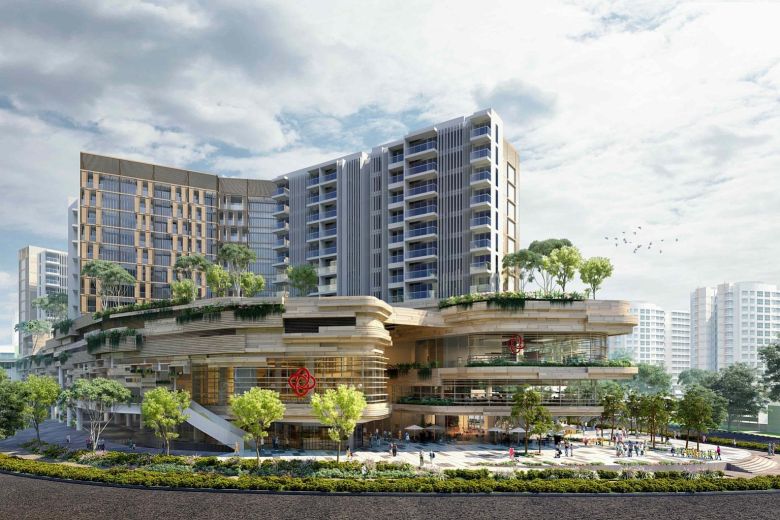 A CapitaLand and City Developments Ltd (CDL) tie-up has clinched a commercial and residential site in Sengkang Central. Their winning bid of $777.78 million works out to $923.59 per square foot per plot ratio (psf ppr) for the 99-year leasehold site next to Buangkok MRT Station.

In a joint statement yesterday, CapitaLand and CDL said their joint venture will transform the 3.7ha site - the largest commercial and residential site awarded since 2015 - into an integrated community hub with 700 residential apartments, meeting the needs of residents in Buangkok with amenities such as a hawker centre, community club, childcare centre, retail shops, as well as public rail and bus transport facilities sited in a one-stop location.

The integrated development is targeted for completion in the first half of 2022, they added.

The winning bid was the highest of the four shortlisted tenderers for the dual-envelope (concept and price) tender, said the Urban Redevelopment Authority, which awarded the site yesterday.

The other three shortlisted bids came from:

•A tie-up between Perennial Singapore and Qingjian Realty, which bid nearly $682 million;

•A Singapore Press Holdings and Kajima Development tie-up, which bid $636.39 million; and

These four bids were shortlisted from seven bids submitted by six tenderers; one of the tenderers submitted two concept proposals.

All bidders were required to submit their concept proposals and tender prices in two separate envelopes.

At the first stage of the tender process, those concept proposals that had substantially satisfied the evaluation criteria were shortlisted to proceed to the second stage of tender evaluation.

At the second stage, only the price envelopes submitted by the tenderers of the four shortlisted concept proposals were opened for consideration. The site was then awarded to the tenderer with the highest bid.

The proposed mixed-use development will have an integrated community and transport hub with a bus interchange on the first storey, a hawker centre on the second storey and a community club that spans across three storeys.

"CapitaLand looks forward to partnering CDL to shape and transform the site into a landmark development that will be an identity marker and new focal point for the Buangkok neighbourhood," CapitaLand president and group chief executive Lim Ming Yan said.

"Various amenities and recreational facilities such as a hawker centre, childcare centre and civic plaza will be right at the residents' doorstep, giving rise to a vibrant and bustling community."